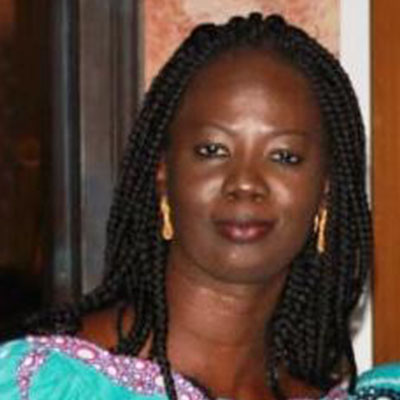 Ndey Naffie Ceesay is an economist by training with a BA in Economics from the University of Hartford, Connecticut, United States and an MSc in Development Studies at the School for Oriental and African Studies in London, United Kingdom. Ms Ceesay has over a decade of experience working in the development field and contributed in the development and application of different policies and strategies towards the economic growth of The Gambia.

During the twelve (12) years work experience in The Gambia civil service Ms Ceesay was directly involved in the development of The Gambia’s first MSME Policy 2008 in recognition of this group of operators as economic drivers; as well as the restructuring of the defunct Gambia Investment & Promotion and Free Zones Agency to the current Gambia Investment & Export Promotion Agency towards achieving a more focussed private sector driven investment promotion agency.

As an industrial economist at The Gambia Ministry of Trade, Industry, Regional Integration & Employment (MoTIE) Ms Ndey Naffie Ceesay has directly engaged local manufacturers towards ensuring that their concerns and needs are addressed at the policy level to facilitate ease of application in the remedy and/or improvement of their operations. Towards this endeavour Ms Ceesay supervised the technical support given to the National Beekeepers Association of Gambia (NBAG) where an assessment of the association was conducted to improve their governance structure and management systems as well as support to partake in local and international trade fairs.

Working at the MoTIE also accorded Ms Ceesay exposure to the World Trade Organisation, International Trade Centre, World Bank, AUC, ECOWAS, UNDP to name a few of several development oriented agencies to not only appreciate Trade Policy but understand the implications when manipulated both explicitly through tariffs or implicitly through non-tariff barriers with the critical importance of data to advice policy measures.

Ms Ceesay has been contracted by the United Nations Industrial Development Organisation (UNIDO) as their national expert in the implementation of the UNIDO/ Gambia Country Programme which included leading the resource mobilisation phase with donor countries and agencies in-country and in Senegal, engaging high level Gambia Government authorities as well as the implementation of the Country Programme composing five (5) Components including Agriculture, Investment Promotion and Renewable Energy.

Since transitioning from civil servant to private consultant in 2015 Ms Ceesay has worked for UNIDO as a national gender expert to assess the gender impact of the concluded UNIDO/GEF4 project and conduct a baseline for the UNIDO/GEF5 project in The Gambia.

From July 2016 to June 2019 Ms Ceesay served as Country Officer in The Gambia for the Partnership for Aflatoxin Control in Africa [PACA]. This is a flagship program of the African Union Commission’s CAADP which seeks to mitigate aflatoxin contamination along the value chain of identified crops towards the development of Agriculture, Safeguarding of Health and Promotion of Trade. The pilot program is in six (6) African countries.

Ms Ceesay is currently contracted by UNDESA and working closely with the MoTIE to facilitate the integration of MSMEs along the regional value chains in preparation of the AfCFTA implementation.

← Back to Our Team